I’ve wanted to make vegan mac and cheese since cutting back on animal products. It seems like it would be one of the harder meals to recreate, but this recipe gets pretty close. The cashews make the sauce super creamy, while the nutritional yeast adds the essential cheese taste. I’m not saying this mac would fool a Wisconsinite, but it probably would make them slowly nod their head and say, “Hey, that’s not bad.” Best yet, if you accidentally eat four servings you won’t sweat that much because it’s made from plants. (Seriously this stuff is really delicious, I’m trying to finish this post so I can go eat some for lunch.)

In other news, I’ve officially been hired at the job where I’ve been temping for three months. I plan on treating myself to some deodorant and a trip to the dentist. Also, Walter has been accepted to grad school much earlier than expected since he is such a smart boy. I raise a spoonful of cheese-less mac and cheese to him. 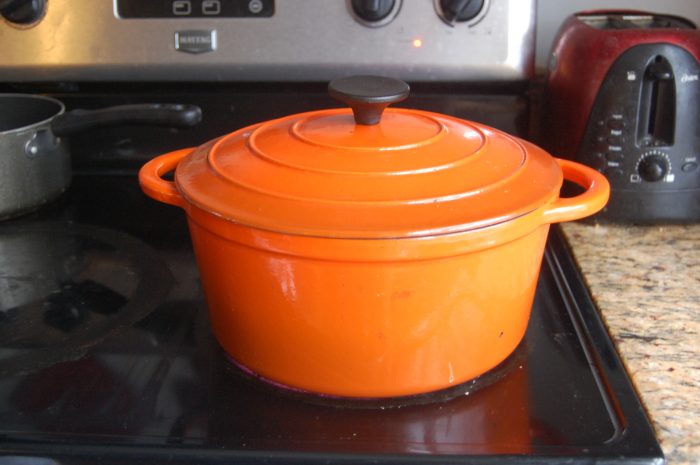 In a big ol’ pot, cook your elbows. Set a second large pot of water to boil for the vegetables. 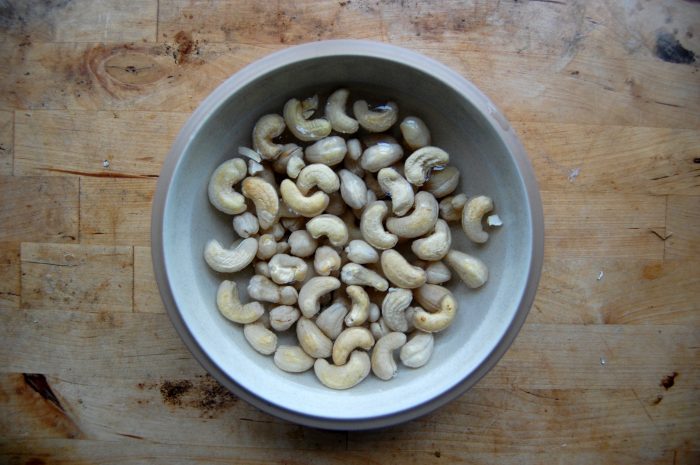 Of all the nuts in the world, cashews are one of the softest. If you have a powerful Vitamix they may not even need to be soaked, but for those with a humbler blender I recommend soaking these boys for an hour. 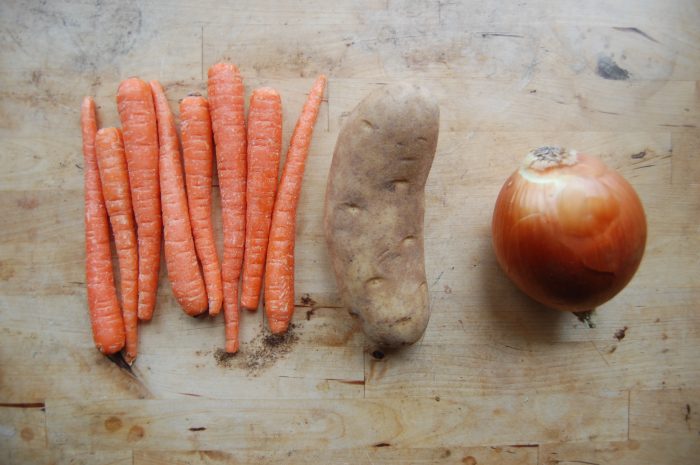 The first time I made this dish I used way too much onion and added it to the sauce raw. That was bad. This time I only used a fourth of the onion and boiled it with the other vegetables, resulting in something much more balanced and less bad.

All the veg will be boiled in the same pot at the same time, so chop them into similar sizes. 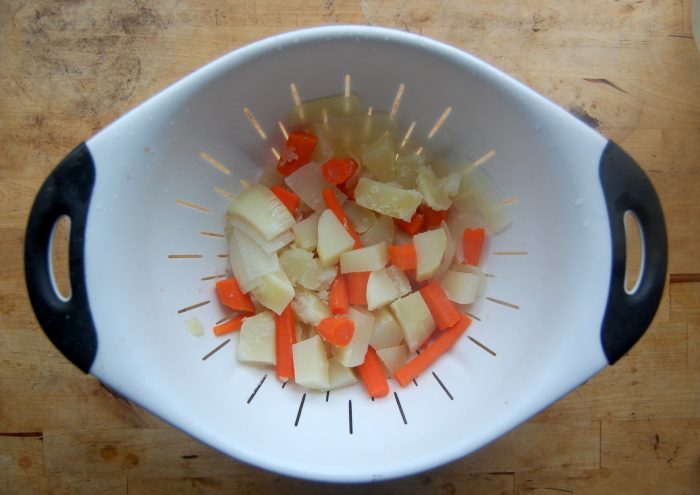 I boiled this lot for about ten minutes. Once the vegetables are fork tender, reserve a cup or two of the water and then drain. 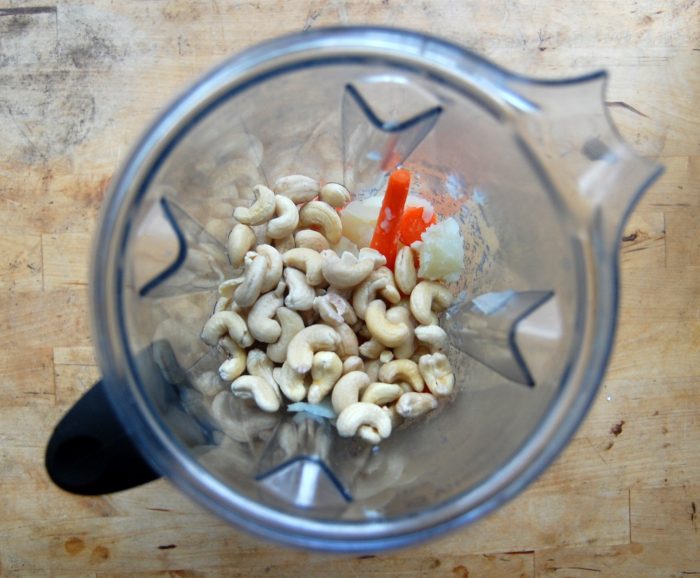 Dump the drained cashews and vegetables into the blender, along with the reserved water, lemon juice, garlic powder, black pepper, salt and nutritional yeast. 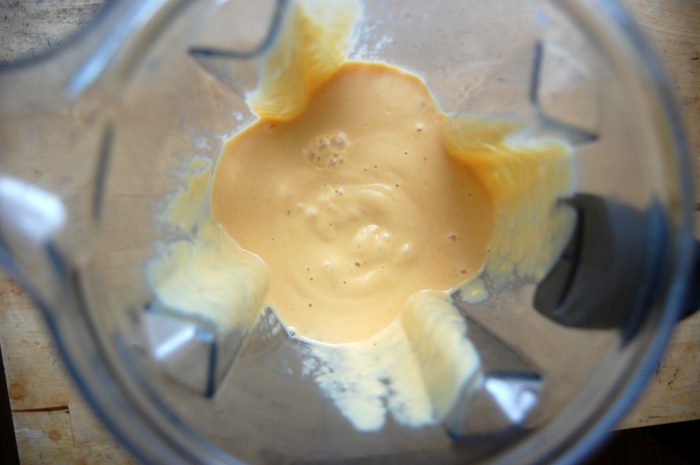 Blend it on up to get the creamy mac and cheese sauce. Add more water if it’s too thick and additional seasoning as you see fit. You will need to add more salt than you’re used to because carrots are just not as flavorful as cheese, it’s okay to admit that! Next time I would include mustard powder and some cayenne pepper. 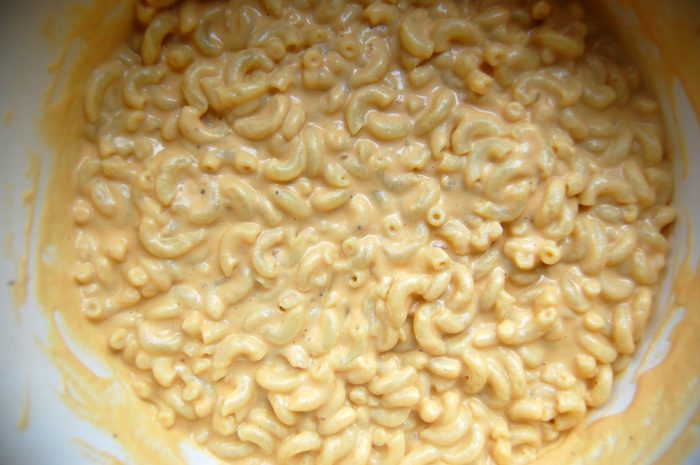 Pour the sauce over the drained elbows and stir up the mac and cheese. There’s nothing like the sound of mac and cheese being stirred. 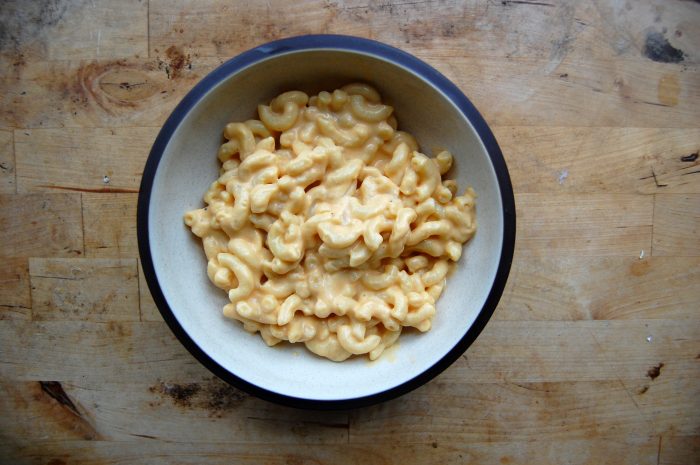 Add some hot sauce and enjoy! 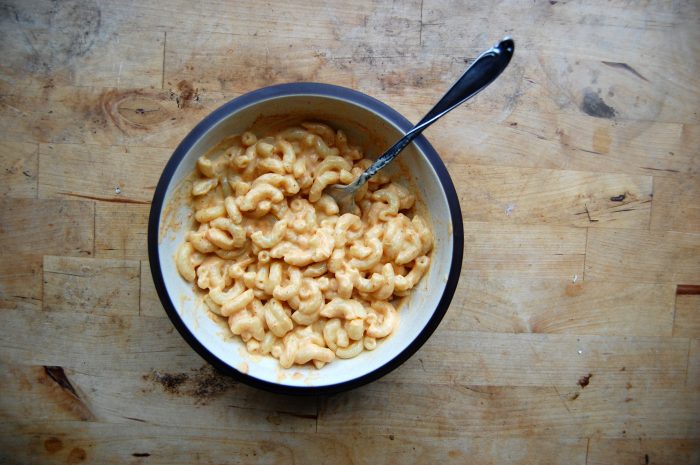