Sometimes it’s better not to know what your food is made of. I’ve had Alfredo sauce a number of times and assumed it was a delicious mystery substance, like Cool Whip or clouds. I discovered that it’s actually just butter, heavy cream, and cheese. You can’t un-see a cup of cream being poured into a large pool of butter, but as long as the result tastes good who cares about calories or heart attacks or the potential meaninglessness of life, right?

I decided to cook this meal completely on a whim. I went to Target after work, light-headed with hunger, and purchased the ingredients for the Fettucine Alfredo along with Bagel Bites and Talenti Chocolate Fudge Brownie Gelato. The moment I got home I ate all the bites and half the ice cream, but that did not stop me from making and consuming a massive amount of fettuccine. I felt so great afterwards!!! 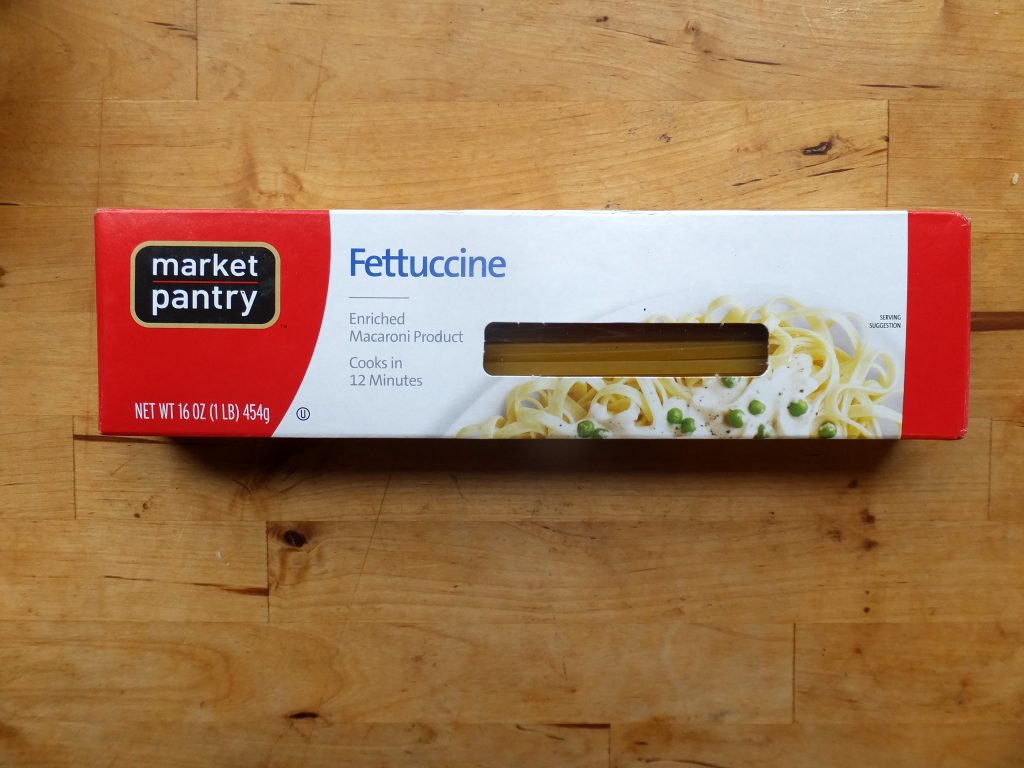 Fettuccine kind of sucks though, right? Angel hair is the best, followed by thin spaghetti, then spaghetti, then fettuccine. But it’s in the name. “Thin Spaghetti Alfredo” doesn’t sound as cool. 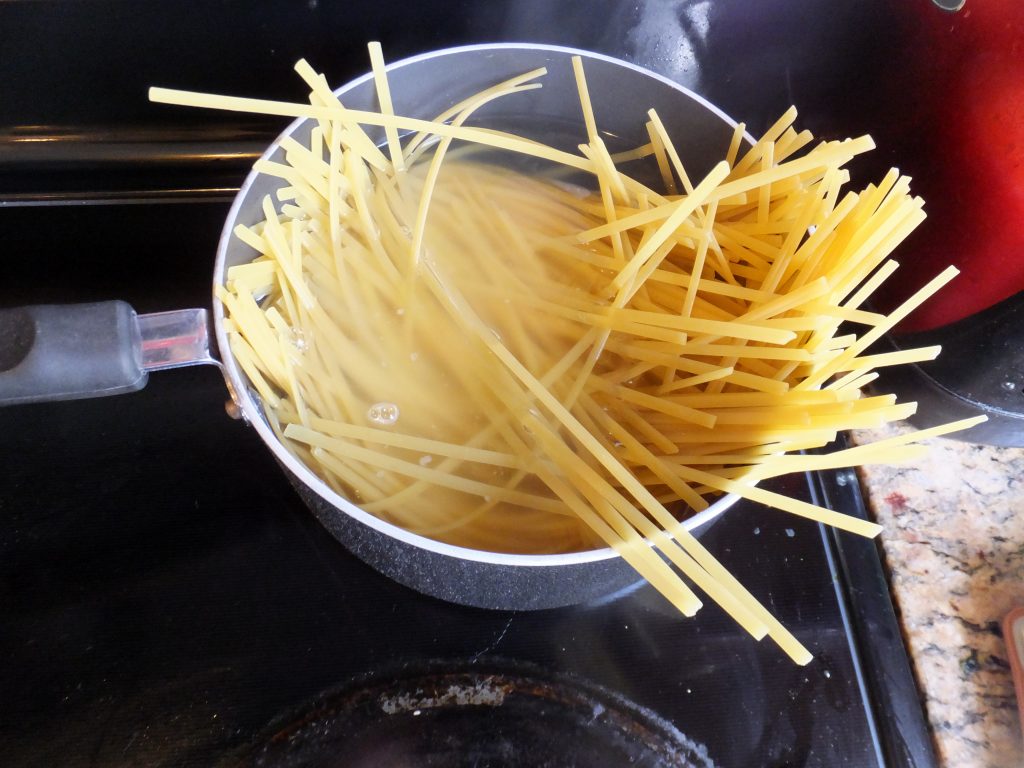 Since our biggest pot was dirty, I attempted to cook an entire box of pasta in the medium pot.

Don’t be an asshole guys, clean out the larger pot and use it. Not only was it a challenge to get the uncooked pasta into the water, as it cooked the water basically disappeared and the poor top fettuccines were quite exposed to the air. I kept stirring it with a fork, dumbly, and burning my hand. Just clean the pot. 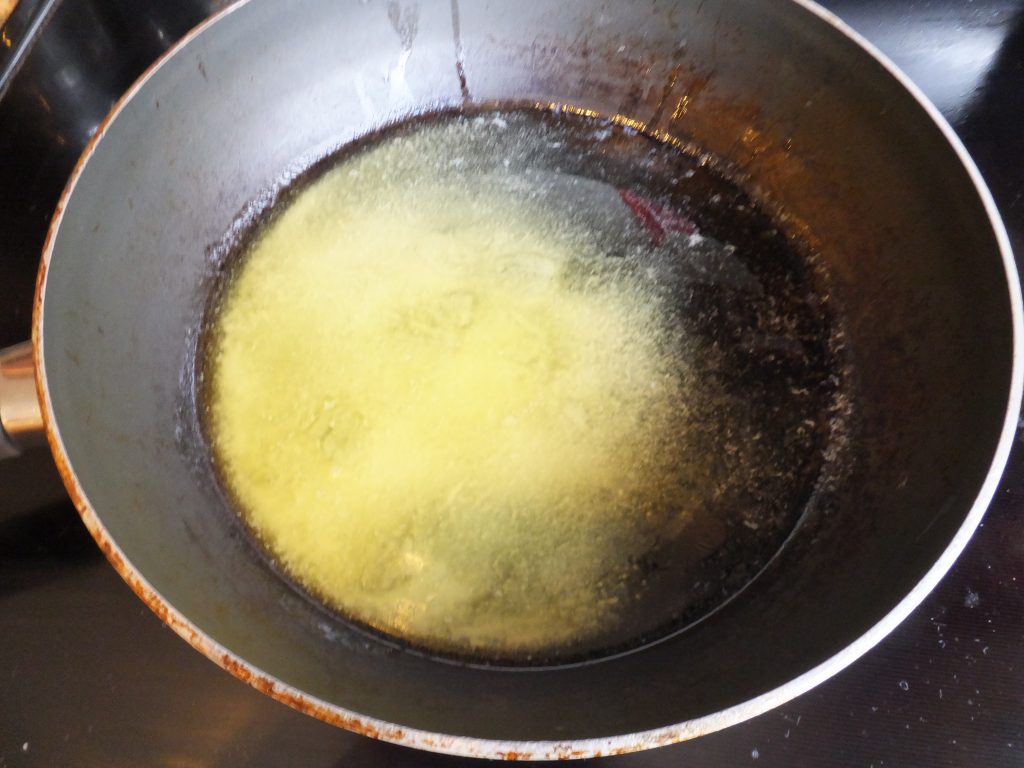 To start the sauce I melted an entire stick of butter over low heat. An entire stick probably isn’t necessary, but I don’t use butter regularly and if I were to leave a tablespoon behind it would just end up in the back of my fridge. Four years from now the yuppie living in my house would find it, lose their appetite, and go to their start-up in a sour mood. I can’t have that hypothetical weighing on my conscious. 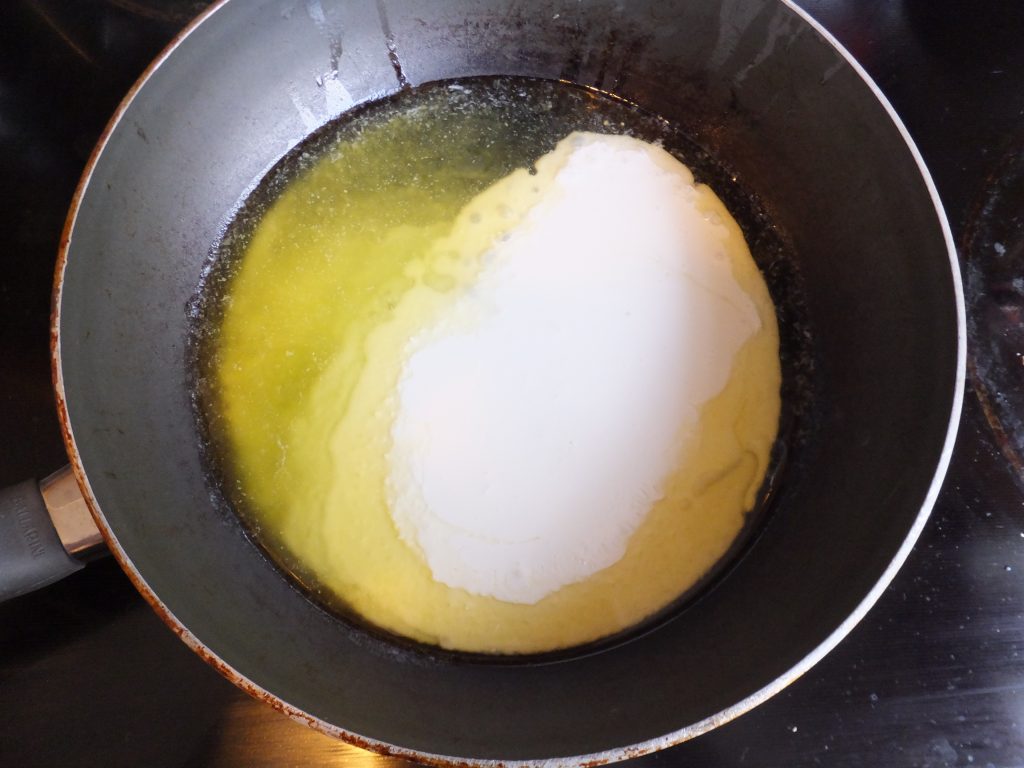 Once the butter was completely melted I poured in an equal amount of cream. Again, I don’t know if that’s really the ideal amount, but a 1:1 ratio makes sense to me. 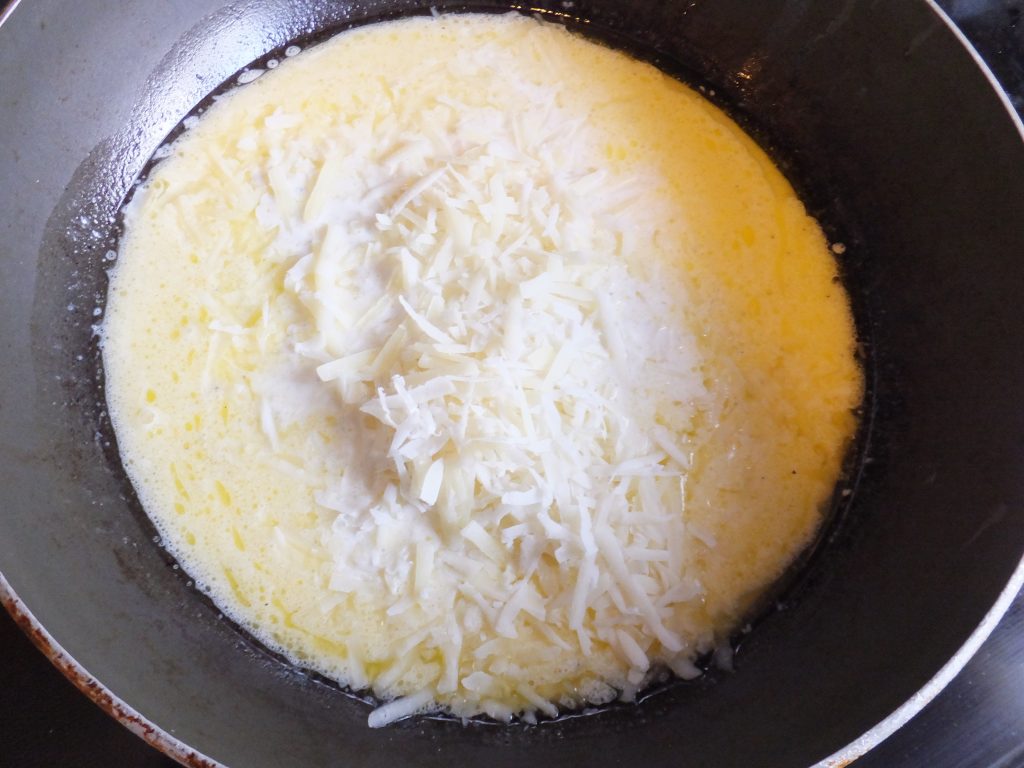 Normally Fettucine Alfredo is made with Parmesan, but I had a chunk of Pecorino Romano left over. I don’t really know the difference between the two anyway, so I grated the whole thing up and added it to the pan. 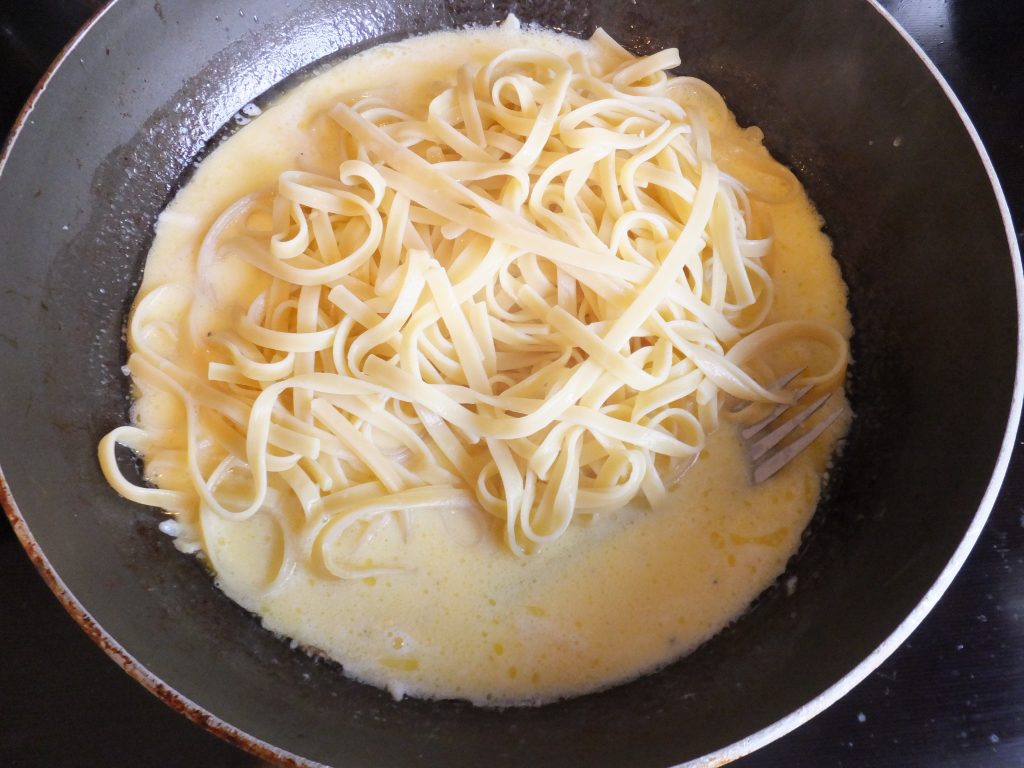 After the pasta was finally cooked, I added it the sauce and dropped in my fork. 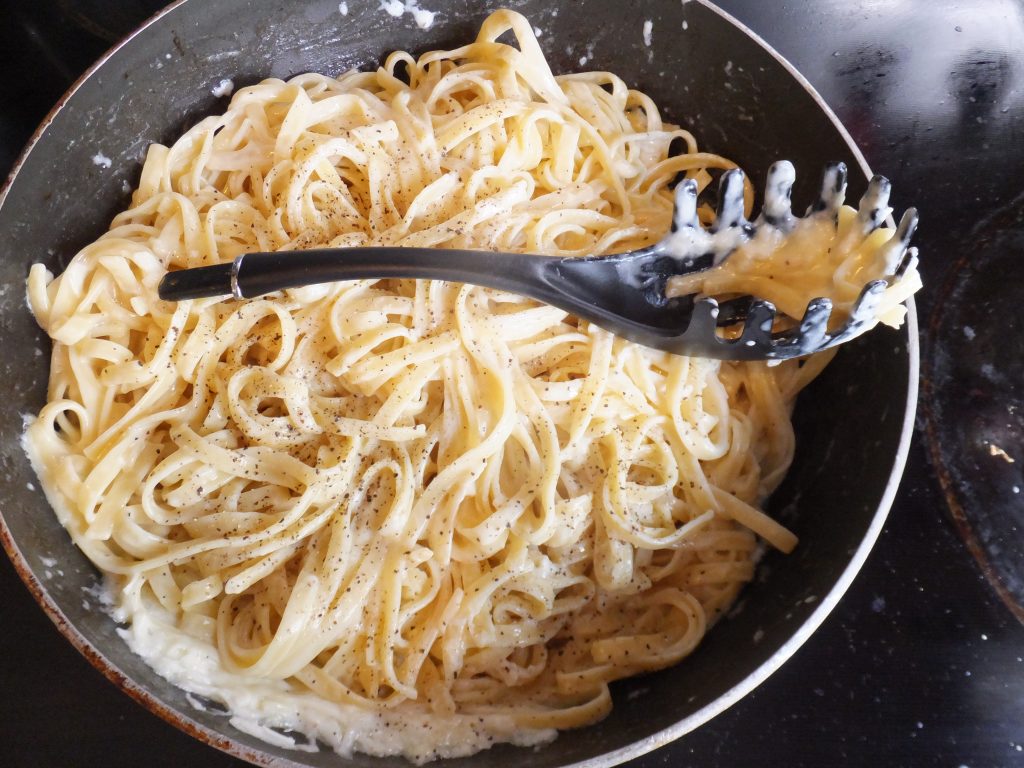 I smartly switched over to this weird half pasta-server and mixed everything up. To finish I ground in a bunch of black pepper. 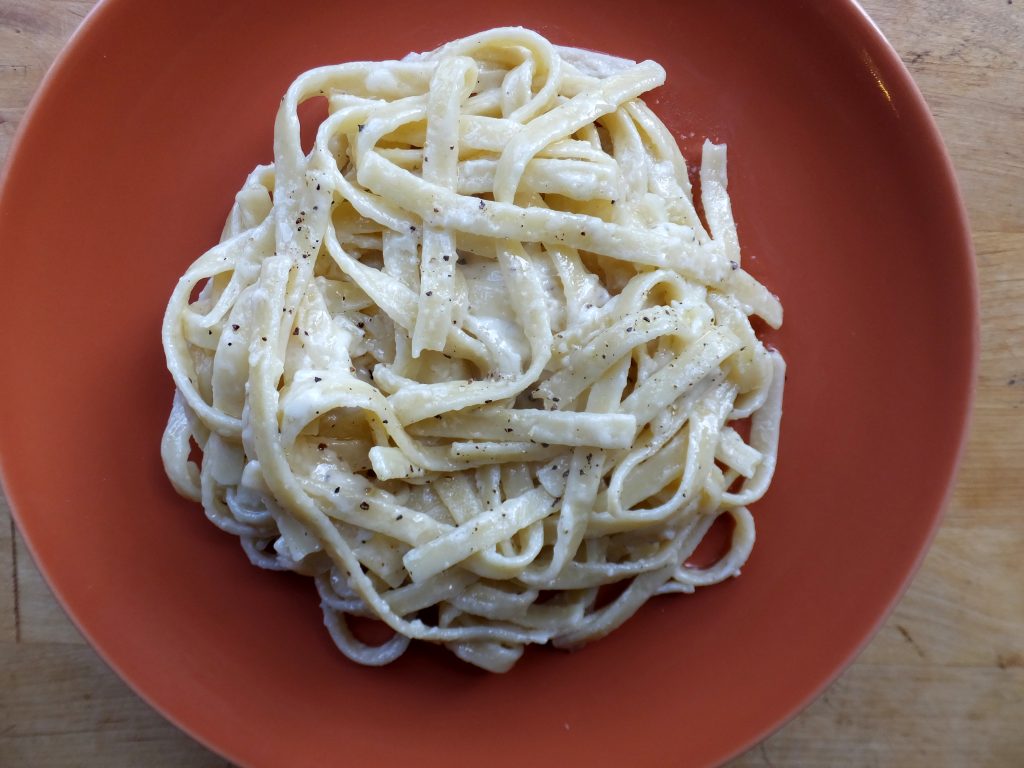 And your done! This is way easy but feels fancy. It also feels like a stomach ache so probably pair it with some vegetables and definitely not Bagel Bites.

I’m going to feel so comfortable after lunch this week!! 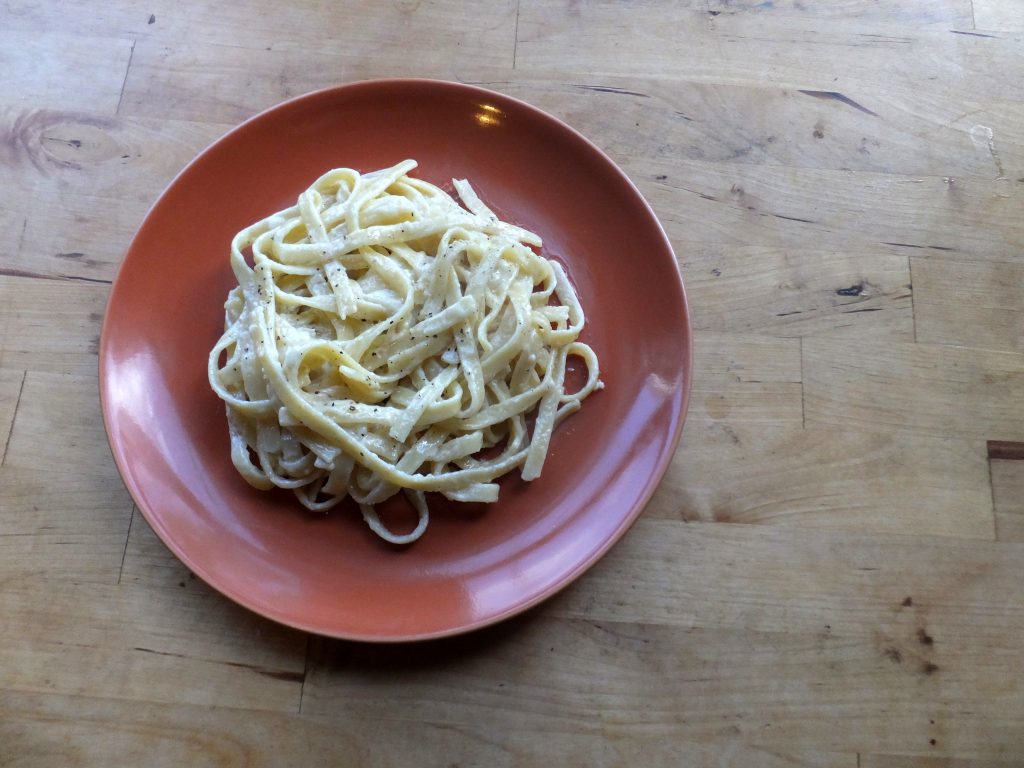