During my third year of college I was lucky enough to spend a semester in India. The study abroad program didn’t allow students to drink alcohol and I filled this massive, gaping hole with chai. Served at every meal and sold at every train stop, chai was a more consistent part of my routine than malaria medicine (the test came back negative). For 15 rupees, about a quarter, you could get scalding hot tea in a thin, clear, plastic cup. I truly believe some chemicals would melt off, giving the tea a unique flavor which I will never be able to replicate.

Back on the other side of the world, my favorite chai is embarrassingly enough from Starbucks. I wish this wasn’t the case, primarily because they charge you $4.00 to pour something out of a box. “A box?!” you say? Yes, a box. See below.

This box contains about four servings and is the same price as a venti, so consider investing. My biggest complaint is that it’s sweet, really sweet. Also no boxed beverage can provide the laptop-toting yuppies or gentle jazzy alternative music that ‘bucks is known for.  To make up for this I put on a business casual outfit and…continued my binge of Sex in the City. It’s like I’m really there! 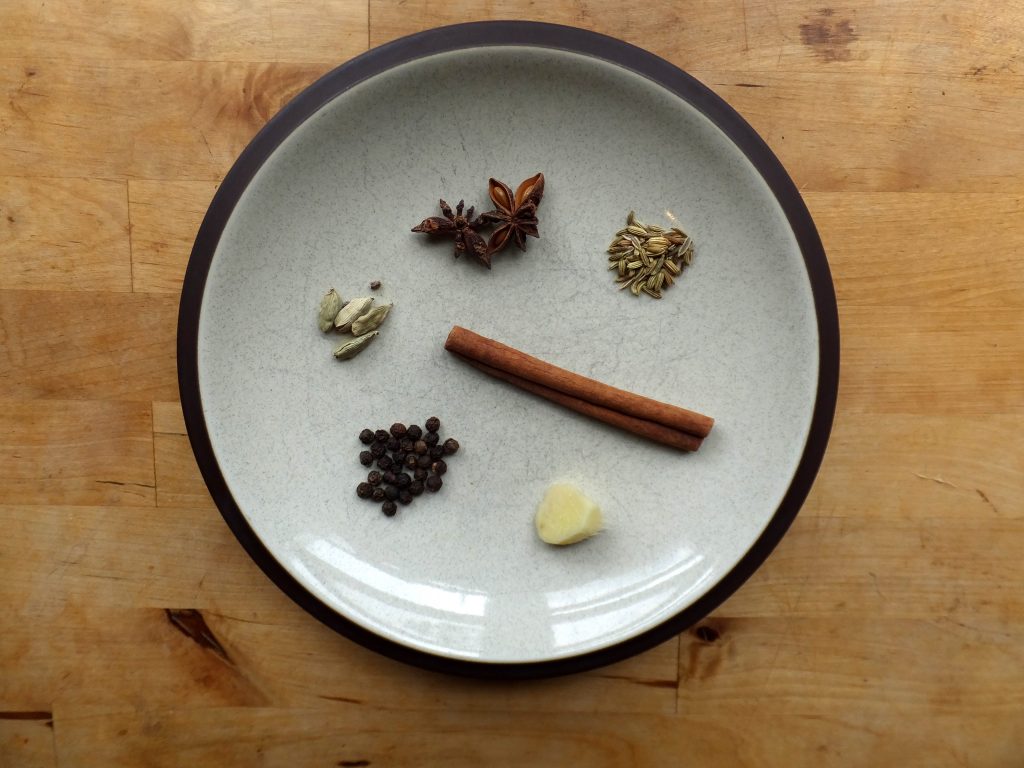 The basic recipe for chai is spices + tea + sweetener + milk = nice. I did some research and picked the most mentioned spices. Starting with the recognizable cinnamon stick and working clockwise, we have a chunk of fresh ginger, whole peppercorns, green cardamom pods, star anise, and fennel seeds. I had to trek out to Whole Foods to find the cardamom and anise and there were exactly 6 tiny green cardamom pods left. I spent 91 cents that trip, the cheapest Whole Foods excursion in history. 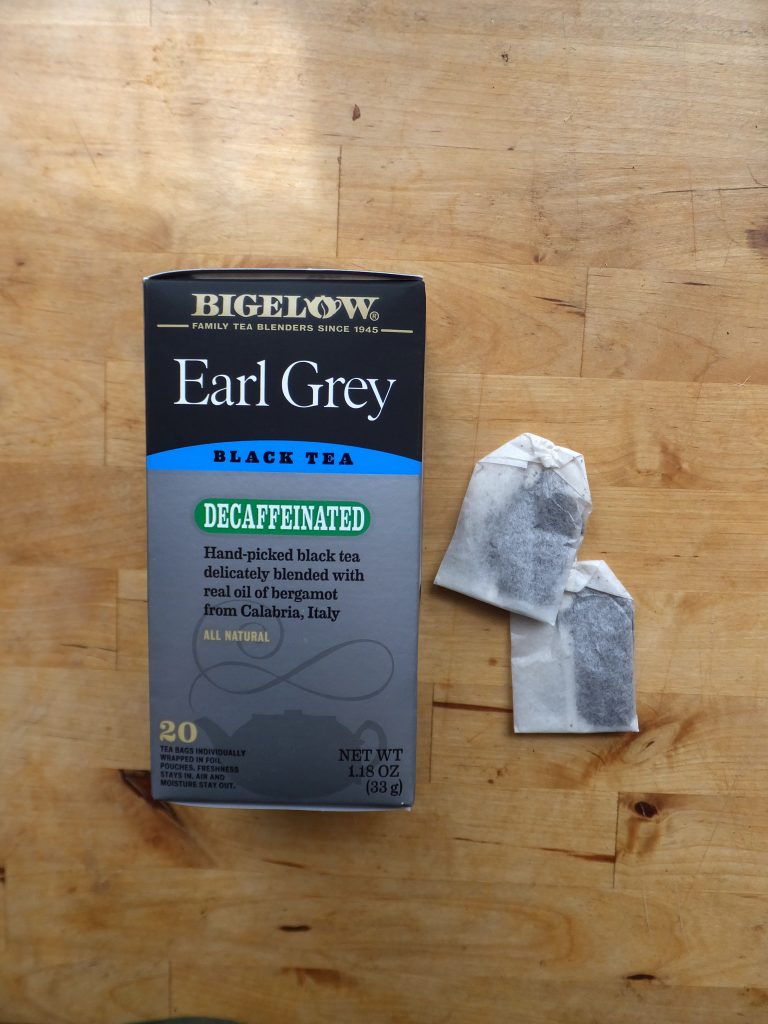 For tea I went super authentic: Bigelow Earl Grey. The cool thing about cooking is you can control for factors like caffeine, which makes me both anxious and inefficient. When I do get something from Starbucks I spend the rest of the day shivering and trying to figure out how mutual funds work. 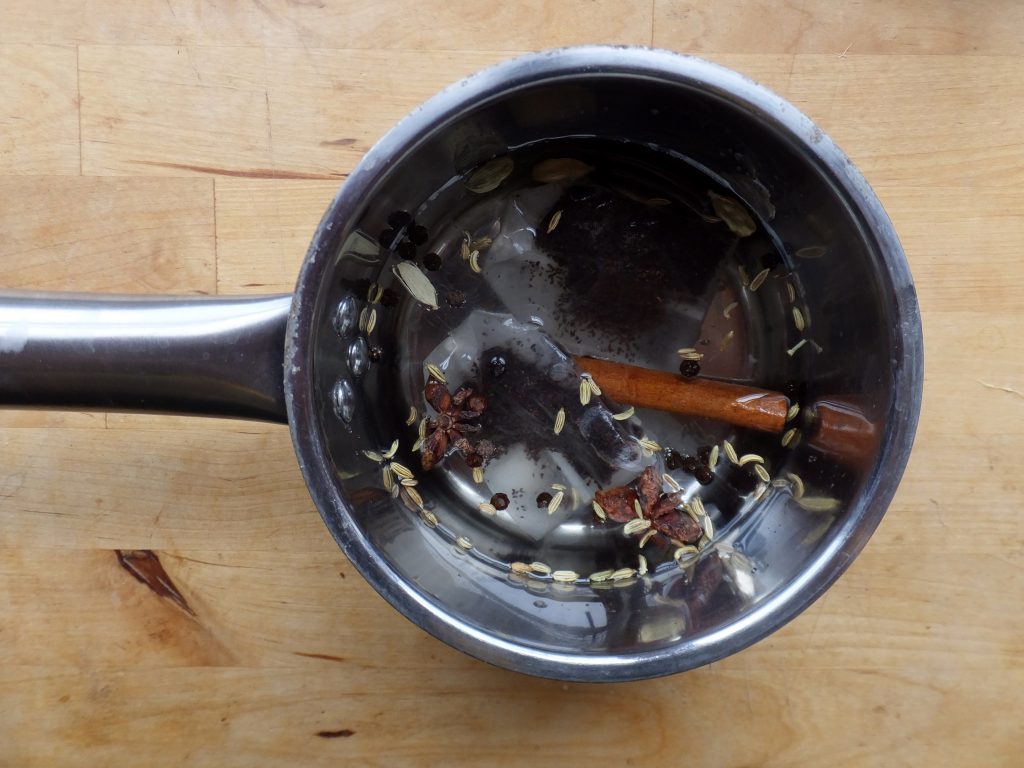 I put two tea bags and the spices into a pot with water. In my mind I was putting equal amounts of all the spices but was I really? I’m going to do further research on how to balance them correctly. 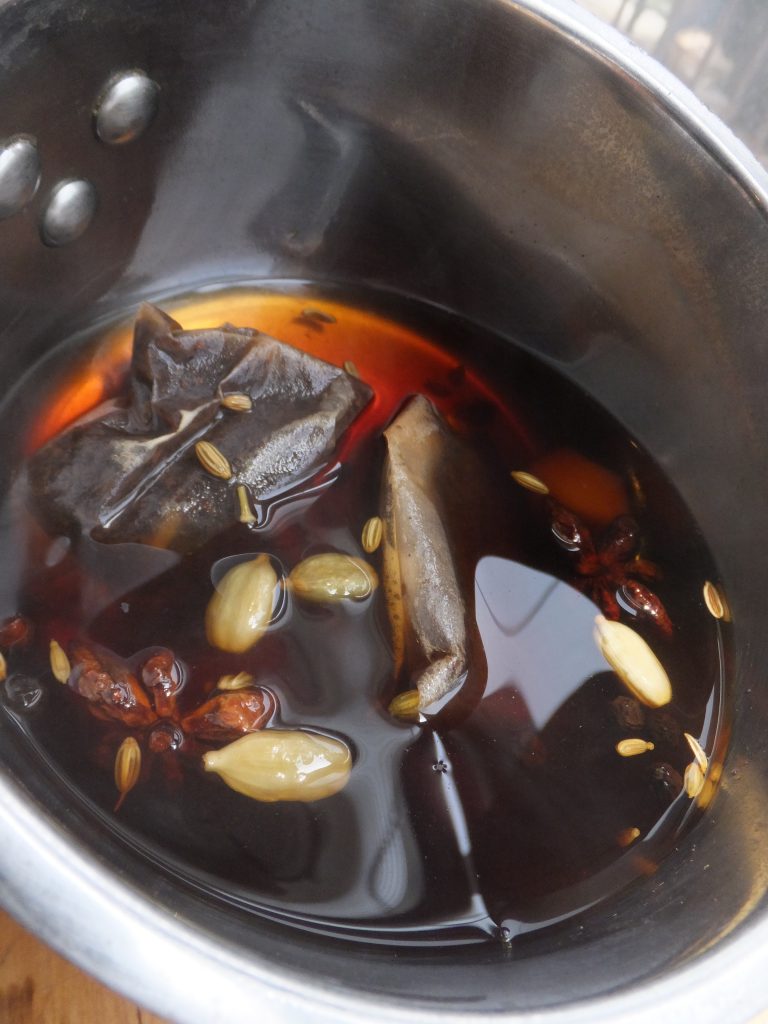 After boiling the water for ten minutes the tea turned this really pretty amber color. I added honey and let it continue to boil. 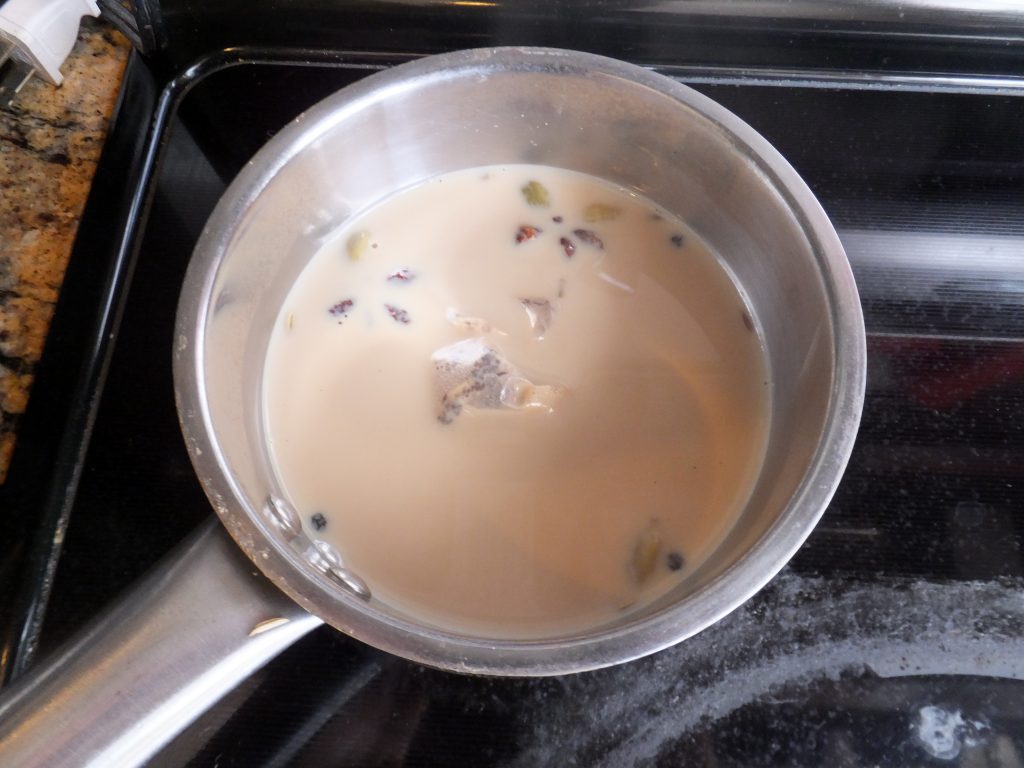 I poured in a cup of whole milk and then let everything continue to simmer. 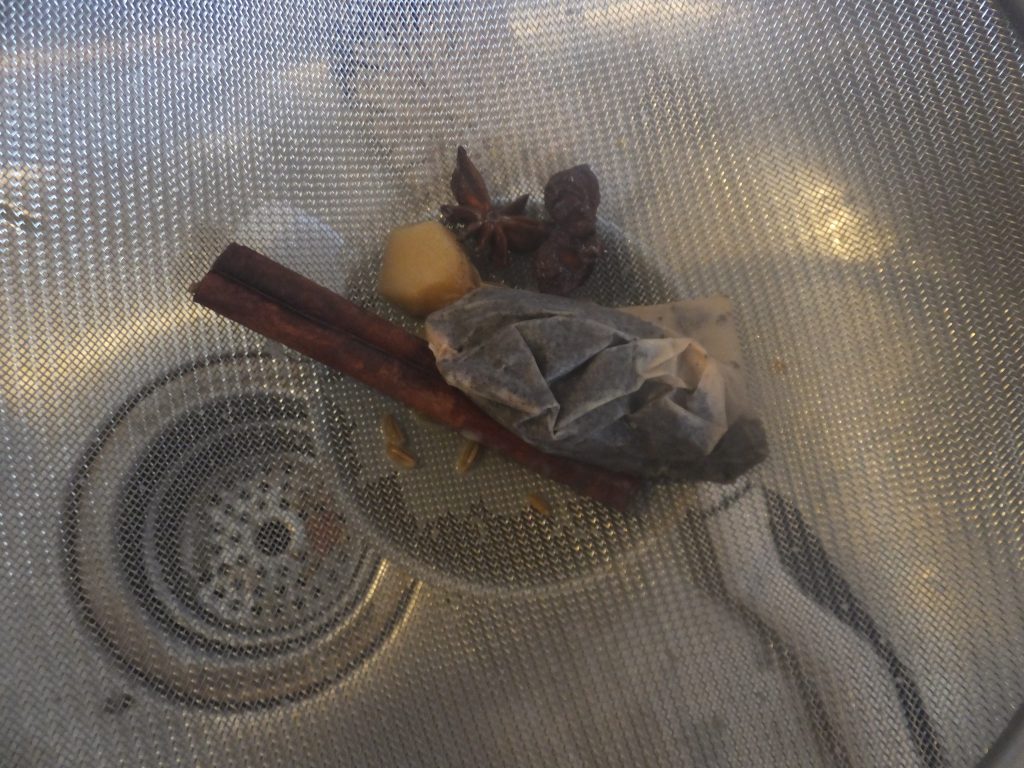 I dumped all the contents over a strainer… 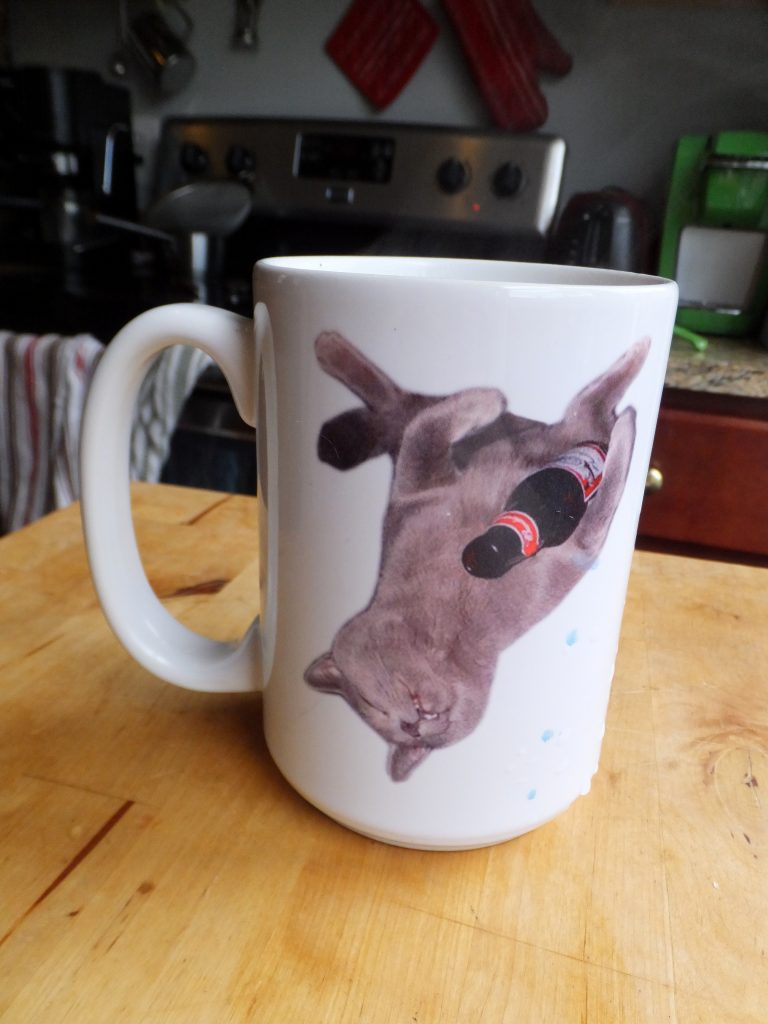 And into this cup. A cat? Drinking a beer?? Insanity!

Then I attempted to transfer the tea from the novelty mug into this nice glass cup. 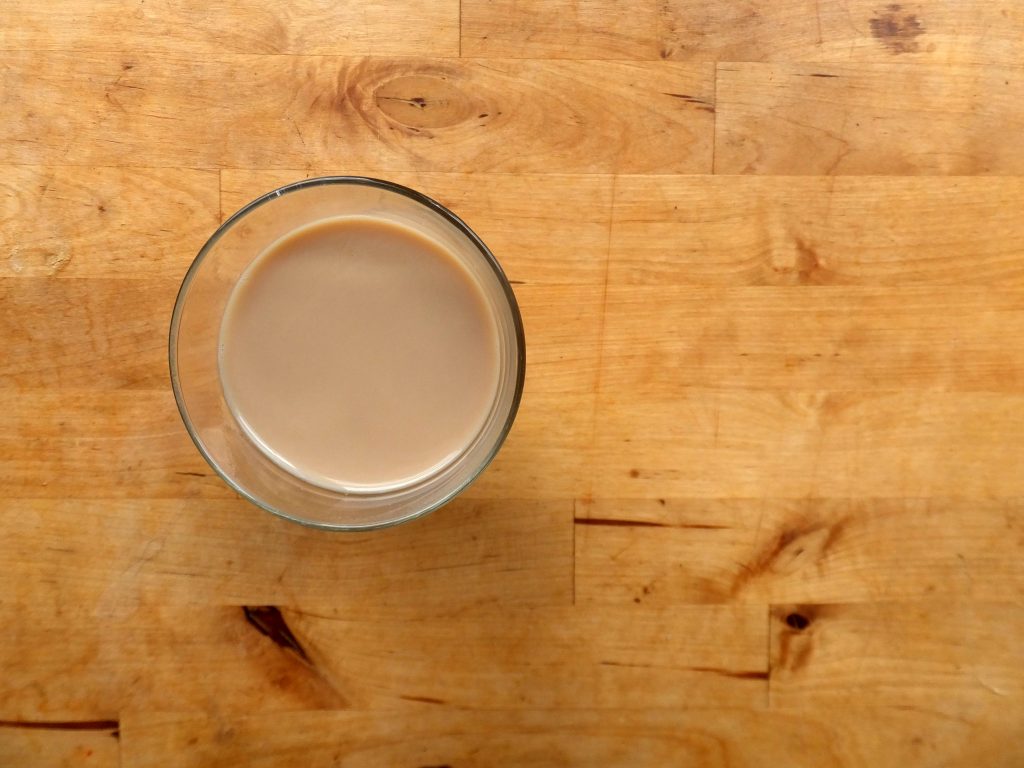 And here is the final product. It turned out really, really good. So good in fact that I drank it all and then immediately made another batch, letting it steep longer the second time around. I need to play around with the ingredients because I want more spice, this turned out a bit too mellow. The process of making chai is very relaxing, while drinking it as Carrie wears a beret and breaks up with Big is less so. I will be making many more batches in the future.