I have very clear memories of eating stuffed shells as a kid, made by my lovable but mob-connected Uncle Vincenzo. Just kidding they were frozen TV dinners. I did my best to heat them up properly, but there would always be at least one bite of ice cold ricotta or tomato. It really just ruined the whole thing. Little kids aren’t great with microwaves, or much else if we’re being honest.

I wasn’t planning on making this dish but the amount of leftover cheese in my fridge was becoming worrisome. I started this recipe thinking it would be an incredibly easy way to clean out my fridge, and it was, but it was also a huge mess. This is partly because the largest pasta shells available at my awful grocery store were smaller than expected. If you want to limit the amount of work you have to do, I’d recommend using bigger shells. Regardless, ricotta will be all over your hands and maybe other areas if you aren’t careful. Cheese in special places will be worth it though, because these are crazy delicious.

Boil the shells until they are slightly under-cooked. I took them out about two minutes earlier than I normally would, and after the baking process they were perfect.

Stir up all the cheeses, parsley, eggs, and black pepper. Per usual I didn’t measure anything, I just used everything I had. It’s a mixture of cheeses, you probably won’t screw it up.

Resist tasting the mixture because it’s full of raw eggs and probably salmonella. This will become harder in two steps.

Pour a layer of sauce in a glass pan. I went with Prego’s Mushroom sauce, shelling out a whole 75 cents more than the generic brand because I’m a grown ass woman.

This is the messy part during which you will be tempted to lick raw egg off your fingers. Fill the shells with a big spoonful of the cheese mixture. The shells ideally will hug the cheese nicely.

But sometimes that doesn’t happen. As long as the majority of the cheese is inside the pasta, it will be fine.

Pour sauce over all the shells. I used the entire can plus a little leftover pizza sauce that I found in the back of my fridge, apparently from three weeks ago. I’ll tell you how that works out. 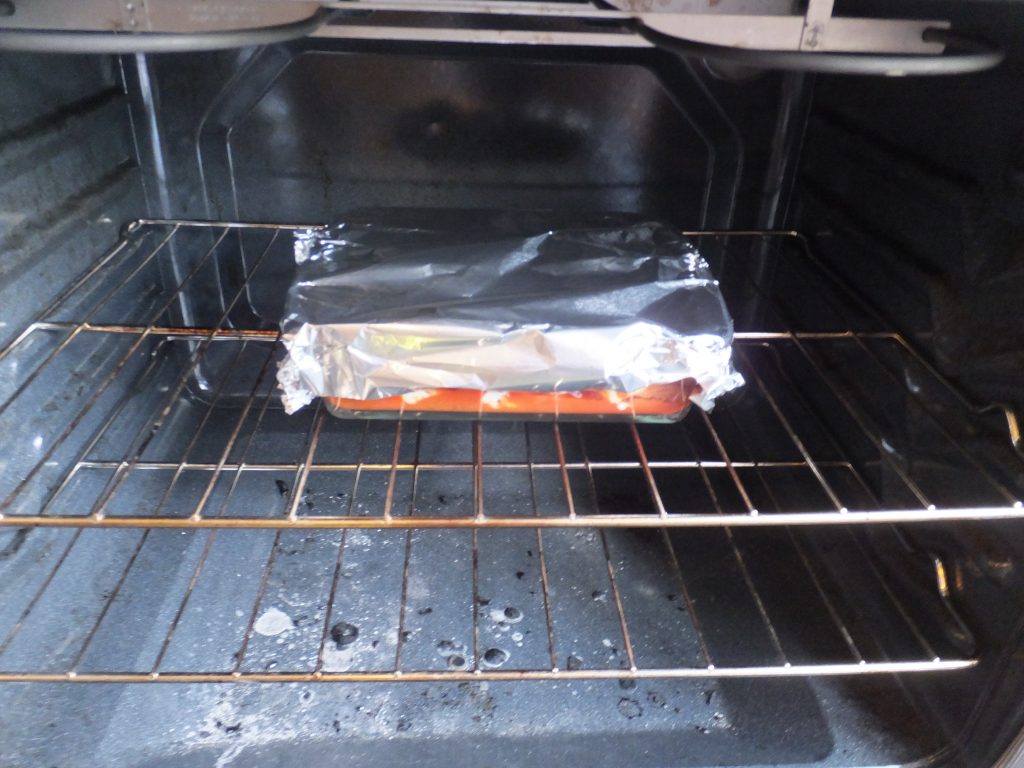 Cover the pan with foil and bake at 350 degrees for 30 minutes. Then remove the foil, sprinkle with the remaining mozzarella, and bake for an additional 10 minutes. 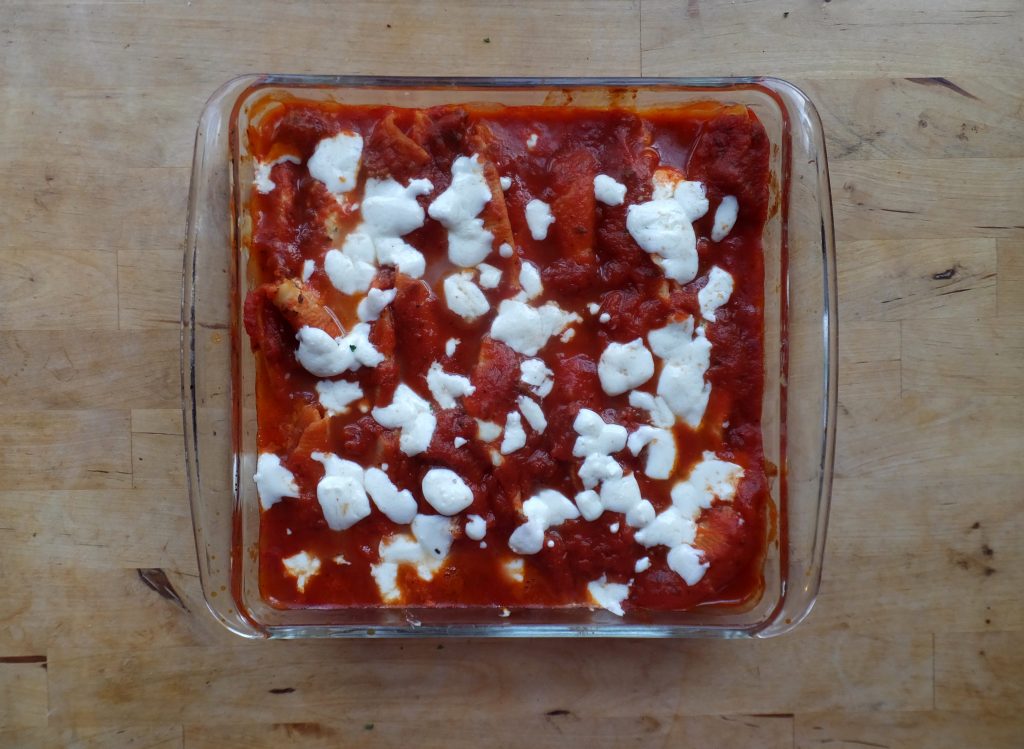 The sauce should be bubbling at this point, confirming that there are no random frozen chunks hidden beneath the surface. Spoon yourself a bowl and get eating. These stuffed shells are so delicious and I can’t wait to eat them in front of my coworkers. 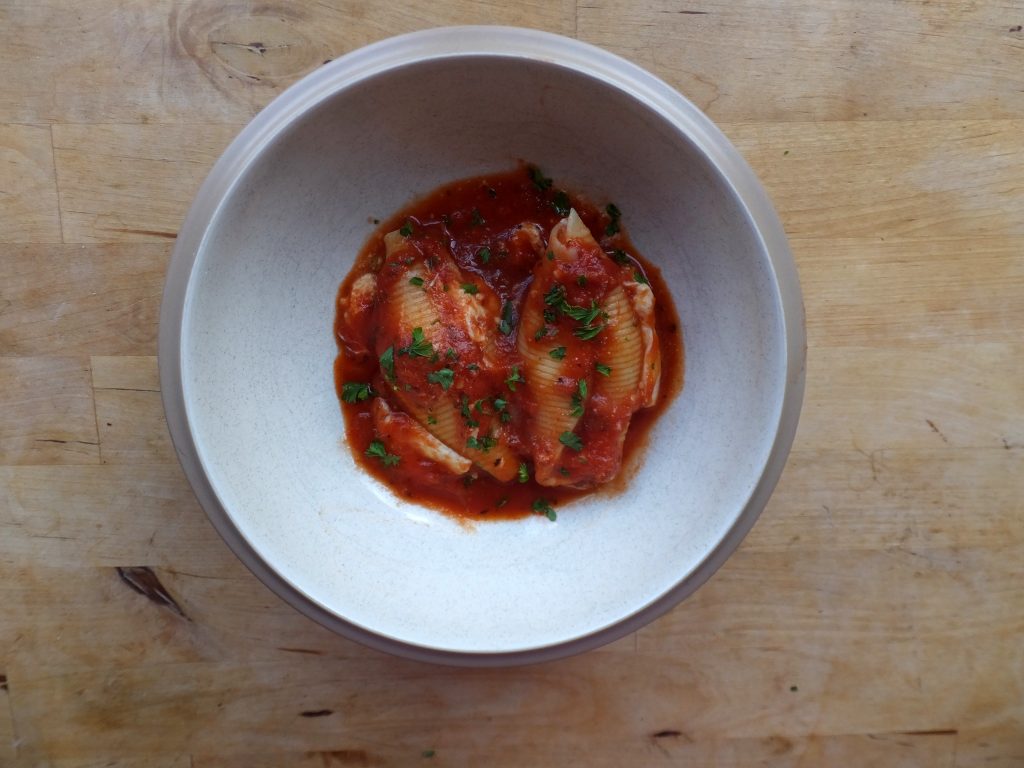 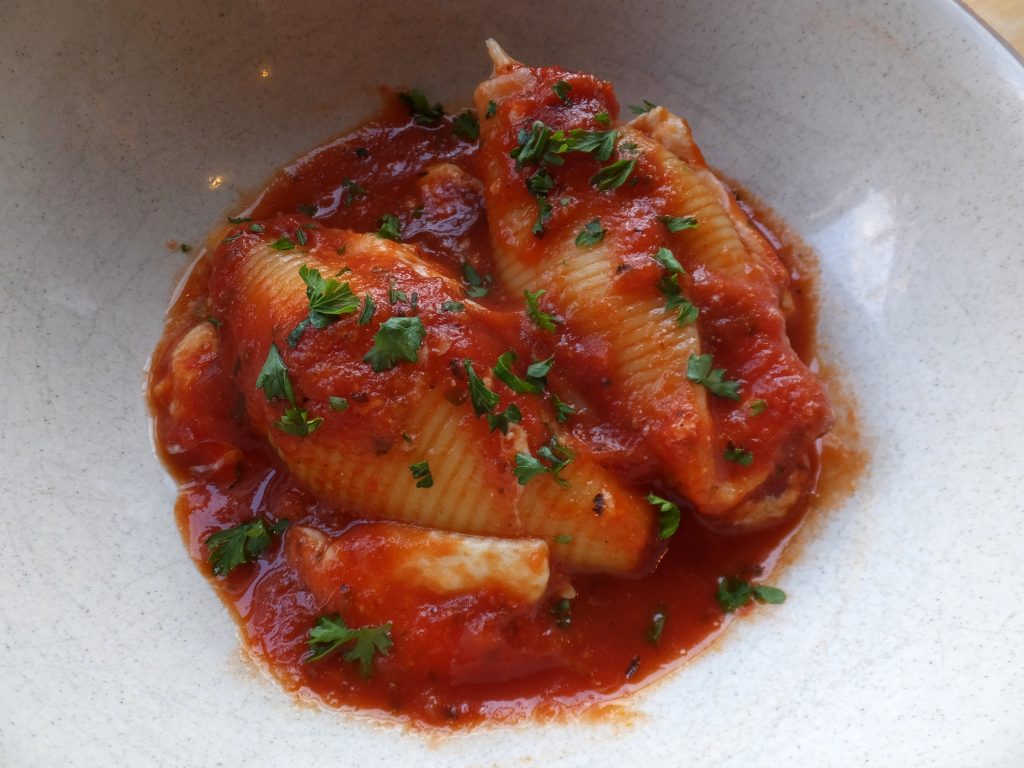