My latest binge-watching pursuit is Cutthroat Kitchen, a show similar to Chopped in which contestants sabotage each other and say things like “His fondue looks more like a fon-don’t.” There are cooks attempting to act and Alton Brown being aggressively smarmy, give them an Emmy! In an episode of Season 1 the contestants were challenged to make Shepherd’s Pie. As if I had fallen into a food-centric Pensieve I was hurtled back to my childhood kitchen, circa 2002, dinnertime.

My family is gathered around the table for a quintessential Garfinkel meal: a layer of beef, a layer of vegetable, and a layer of instant mashed potatoes baked in a 9 by 13 glass pan. Where did this authentic recipe come from? Perhaps it was passed down on my father’s side, brought over from Ukraine with my Jewish great-great-grandmother as she escaped Nazi pursuit. Or maybe this traditional meal was established on my mother’s side, her ancestors traveling from Germany to the United States with bags of frozen peas on their backs.

While my culinary heritage remains a mystery, for now I will try to turn this Northern New Jersey classic, Shepherd’s Pie, into vegetarian comfort food.

Ingredients for the potato layer:

Ingredients for the meat layer:

Ingredients for ever and always:

I peeled my potatoes, chopped them into similar sized chunks, and threw them into a pot of boiling water. They need to cook until fork tender, about fifteen to twenty minutes.

As my potatoes boiled I started the meat layer. I cooked down an onion and a clove of garlic in some olive oil, seasoning with salt and pepper, and then added chopped shiitake mushrooms. A variety of mushrooms would probably work with this dish, or you could omit them all together. I love mushrooms and really think you should give them a chance even after that time they forgot to pick your sister up from the airport.

Once the shiitakes were cooked thoroughly, I added the tomato paste, soy sauce and half of the vegetable broth. I made a rue by whisking a tablespoon of flour into a separate bowl of broth and then added it to the mushrooms to thicken the sauce. If you are feeling overworked, just quit here and eat potatoes with gravy.

For the meat crumbles I used Boca veggie crumbles. I prefer Morningstar, but this is what was available. Like any good cook, I go food shopping immediately prior to preparing a meal and make do with exactly what I can find.

Once the potatoes were cooked and out of the water it was time to to mash them. You can make them as healthy as you’d like, but I decided to go big, adding butter, sour cream, and half and half. Okay I’m lying, I used straight-up cream but was too embarrassed to list it in the ingredients. Just prepare the potatoes to your liking.

With both of the components ready, I built the pie. 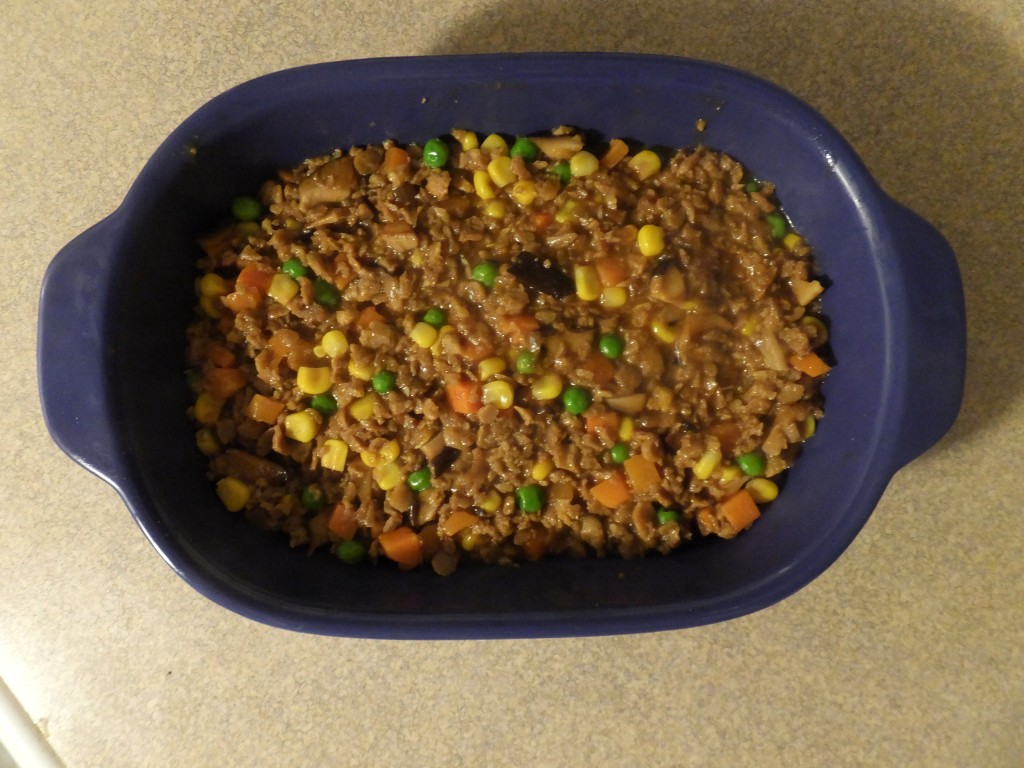 You may be thinking to yourself that this blue baking pan is too small to hold all of the stew; you are correct. I currently do not own a family-sized pan, so I’ll be bringing the remaining unbaked Shepherd’s Pie to work for lunch. I think a 9 by 13 pan would be best suited for this amount of ingredients. 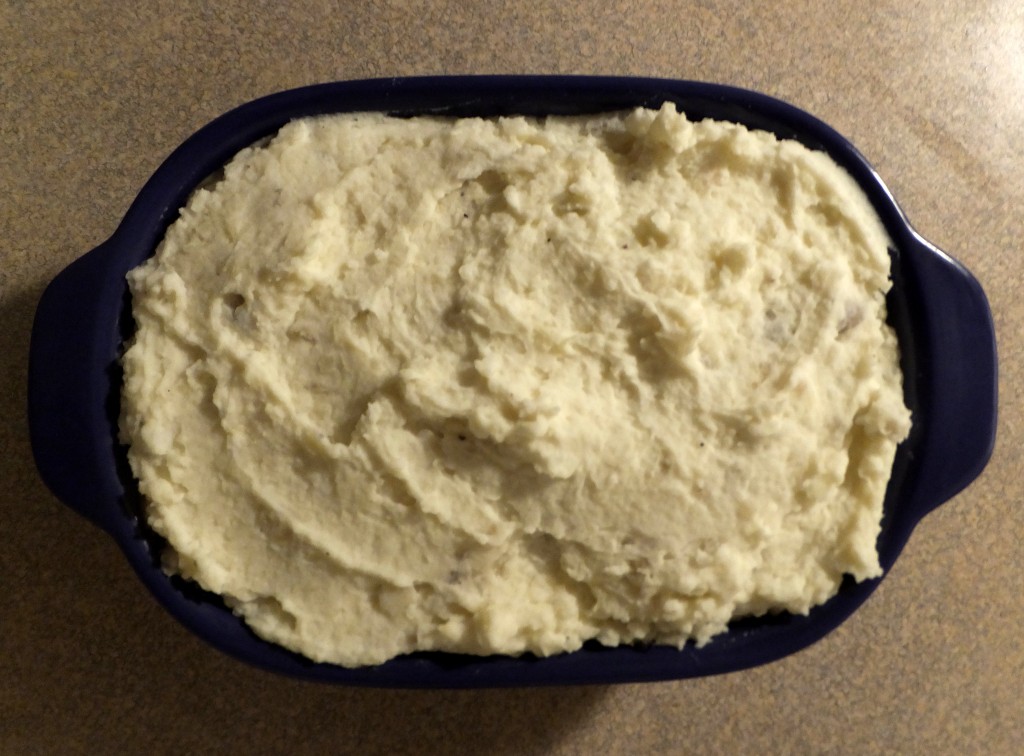 Be careful to get the meat to potatoes ratio correct, I think my dish came out a bit potato-heavy. I put the pie in the oven at 350 degrees for about thirty minutes. Once out of the oven, I garnished it with my appropriately-sized parsley. 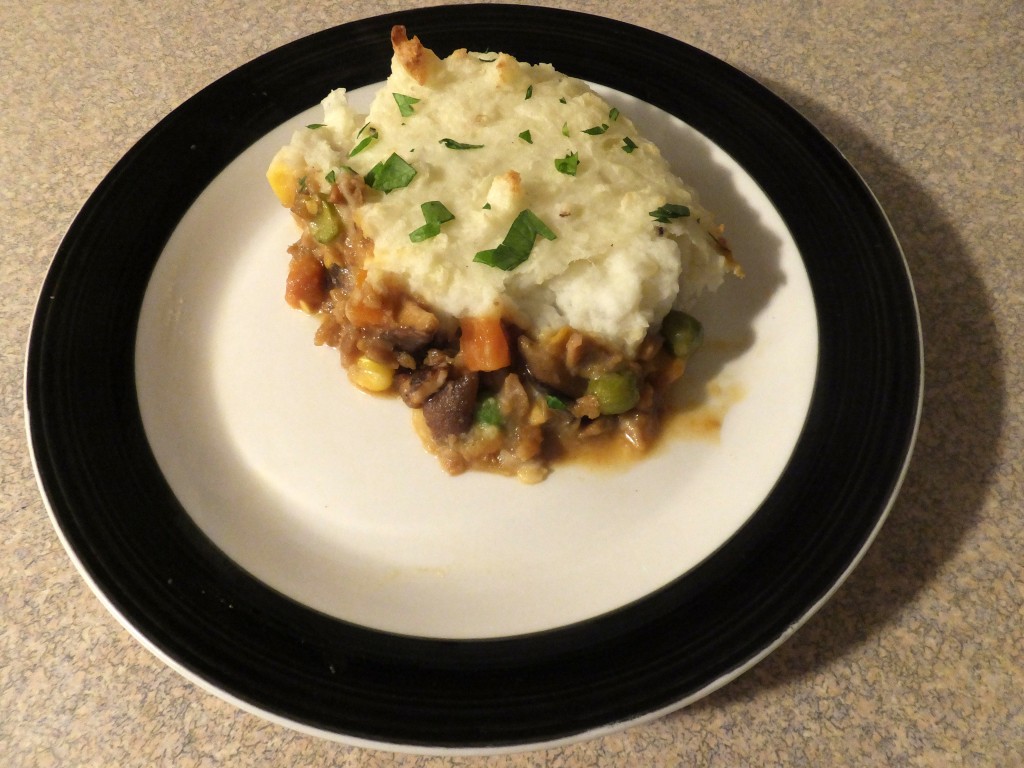