I received Upton’s Naturals Bar-B-Que Jackfruit in December’s VeganCuts box but haven’t gotten around to trying it until now. Technically this product doesn’t claim to mimic a specific type of meat, it only says “Jackfruit has a consistency similar to shredded meat.” It’s “minimally produced” and I can even pronounce all of the ingredients. (Why is this an argument? That vast majority of things I can pronounce I shouldn’t eat.)

Let’s open her up.

While meat-in-a-bag may be confusing to the carnivores among us, it’s a mainstay of vegan products. One of my favorite vegetarian alternatives is the MorningStar Hickory BBQ Riblets. They also come in plastic bags, which I end up getting very intimate with to reach the last bit of sauce.

On to the pan it went with some oil, my hopes as high as a jackfruit swinging from a tree. Visually I can see why this would be compared to meat, specifically a fancier brand of dog food.

In the process of squishing the stuff from the bag onto the pan, some sauce found its way onto my finger. Not one to waste a paper towel, even in the name of suspense, I licked it off. While I was hoping for a sweet sauce that would steal my heart and my dignity, I was met with only tangy bitterness. My dreams of a dinner fit for a Southern Queen were starting to grow hazy.

For the sake of truth in journalism I kept on. More importantly I had nothing else to eat for dinner. I put the meat on a toasted potato bun and covered it with coleslaw.

Despite the inauspicious finger lick, I took my first bite. The sweetness of the coleslaw and the potato-ness of the potato bun did their best to enhance the jackfruit but, as my father once said to me, their best was not enough. While the texture is more convincing than the flavor, I wouldn’t call it appealing. This product is very much a fruit, and it’s a fruit covered in barbecue sauce. Some things just shouldn’t be.

To be fair, I went into this taste test with the wrong mindset. I wanted and expected pulled pork, which this product doesn’t pretend to be. If you’re into really tangy barbecue you might enjoy this. If eating all-natural meat alternatives is something you do on a regular basis, your taste buds probably have given up at this point so you may as well try this. For me, the combination of bitter flavor and off-putting texture was too much. I managed to choke down about three-fourths of the sandwich. If that doesn’t convince you to eat something, I don’t know what would! 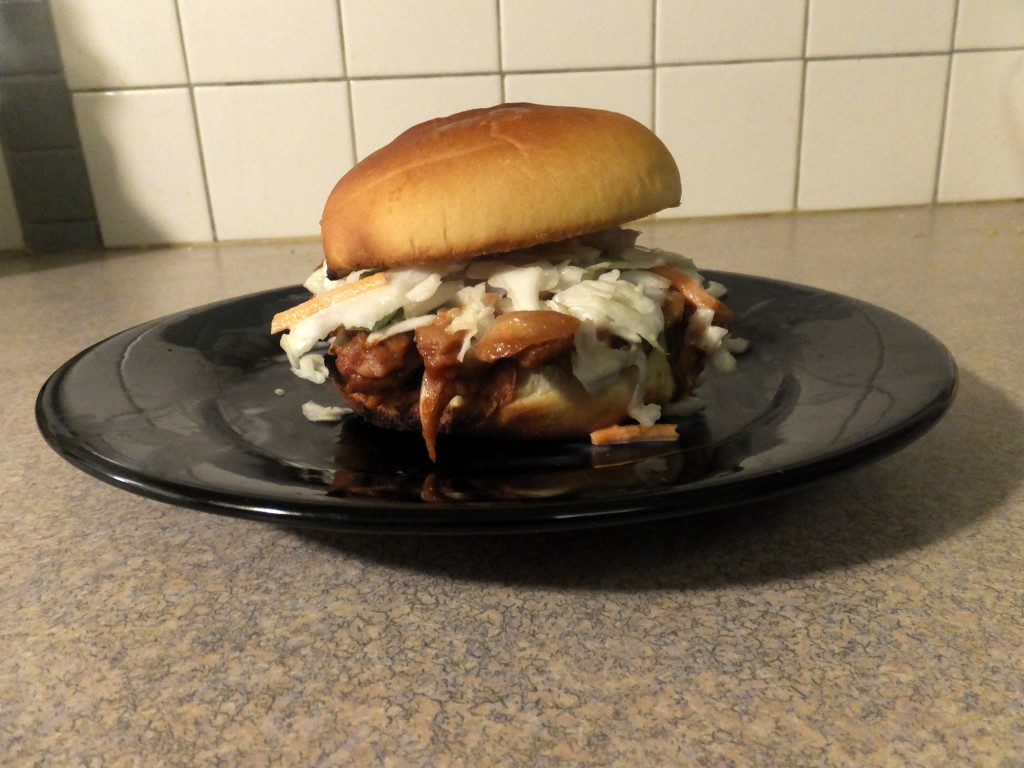