When I was a kid my absolute favorite meal was spaghetti carbonara. My other absolute favorite meal was ketchup and bologna, so standards were high. Knowing my health-freak parents and the anti-fat craze of the ’90s, I probably ate a version made with fat-free Parmesan along with turkey sausage-replaced bacon. This flavorless bowl of pasta set my eight year old taste buds on fire.

Get some water on the stove and once it’s boiling add in the pasta.  In the meantime start working on the meat. I decided to stick with vegetarian sausage in the name of tradition and in the name of vegetarian bacon sucking. I’m really into Tofurkey’s Italian sausage but I wasn’t sure its flavor would work well with this recipe. I tried the Kielbasa flavor and was very pleased.

I ended up only using three links, but two would definitely suffice depending on how much meat you can handle 😉

Give the sausage a good chop and then toss it on a pan with some oil. 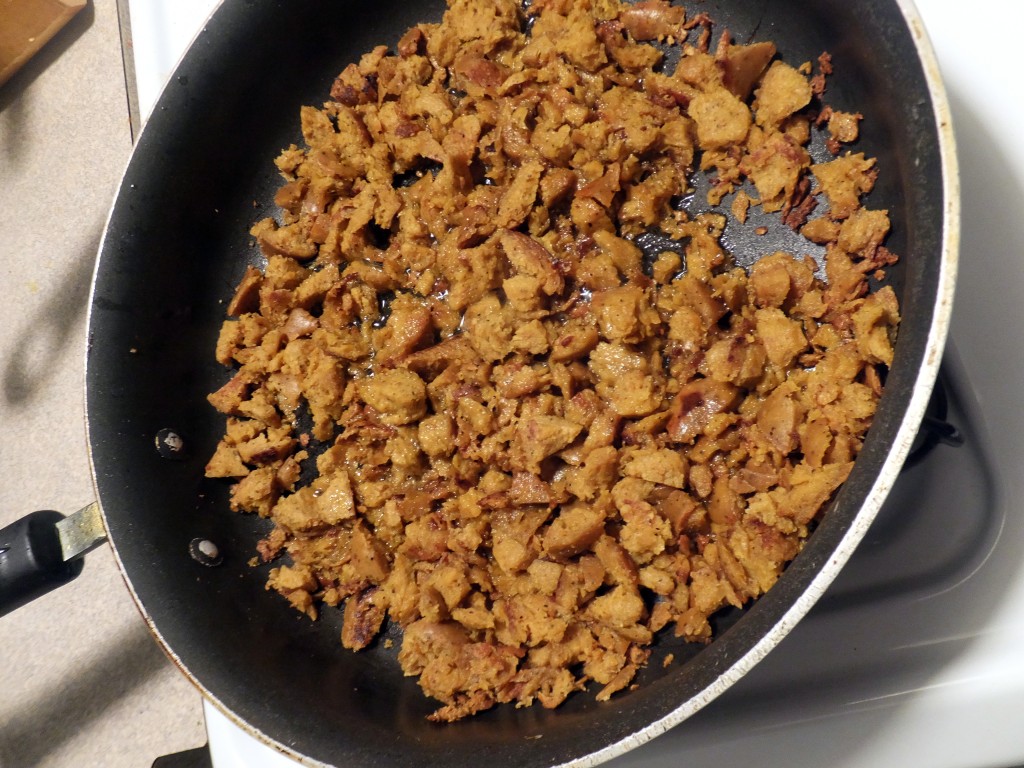 Once the sausage started to brown I added some chopped garlic.

While everything is cooking, prepare your sauce. You will need: four eggs, parsley, Parmesan cheese and a SECRET INGREDIENT (water from the pasta pot).

I was hoping to get a little fancy with the cheese, but unfortunately I’m not qualified to spend $20.00 on dairy products. I’d like to think that one day I will walk down the aisles of Whole Foods, tossing blocks of Tomme De Savoie and Stanswer Schafkase (I googled “fancy cheese”) into my cart willy-nilly. I stuck with a pre-grated variety, but I poured it into a bowl so no one would know the difference.

I chopped up about half a cup of parsley, leaving some aside to sprinkle over my serving. I like parsley because it’s fresh and light, a nice contrast to the richness of the dish. It also adds color. I don’t like parsley because unless you have a family that resembles the Romneys you won’t be able to use the entire bunch. Seriously, what do people do with so much parsley? I’ll have to start garnishing my cereal.

I decided to use two whole eggs and two egg yolks, but play with the proportions. If I was ever feeling super saucy I’d just go for yolks. I lightly whisked them and then added the parsley and  about 1.5 cups of cheese. 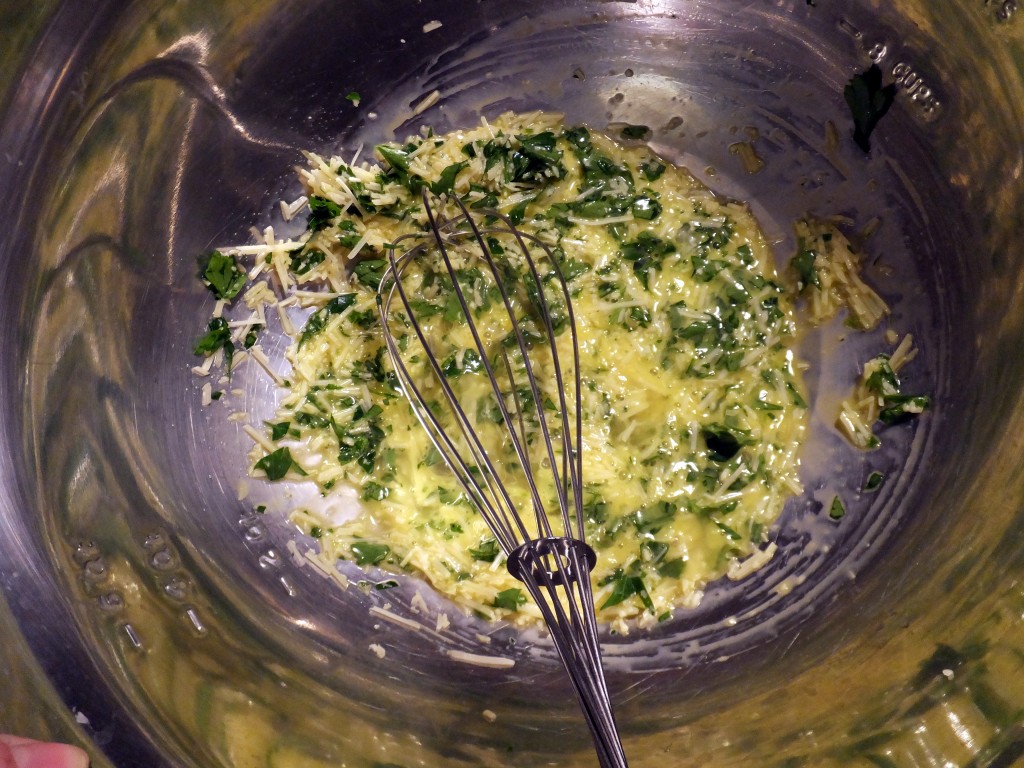 Okay, here’s the sneaky party. Take about a fourth of a cup of the pasta water and whisk it into the sauce. It should start to form a cohesive sauce. Assuming your pasta is cooked add it into the bowl with the sauce. 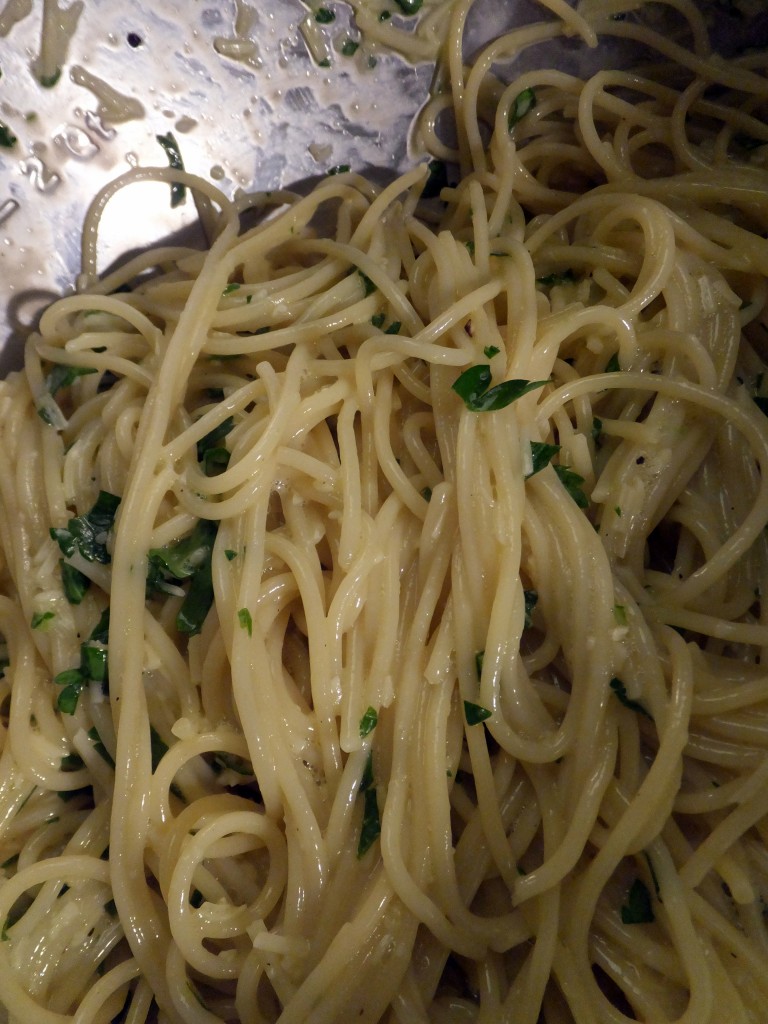 If your sausage is crispy enough to your liking, add that to the pasta. Grind in tons and tons of black pepper and stir it up. I served mine topped with more Parmesan and about 1/10000th of the parsley I have left.

Now it’s time to eat your spaghetti carbonara. Or at least switch from eating out of the mixing bowl to eating out of an individual bowl. Whoops.